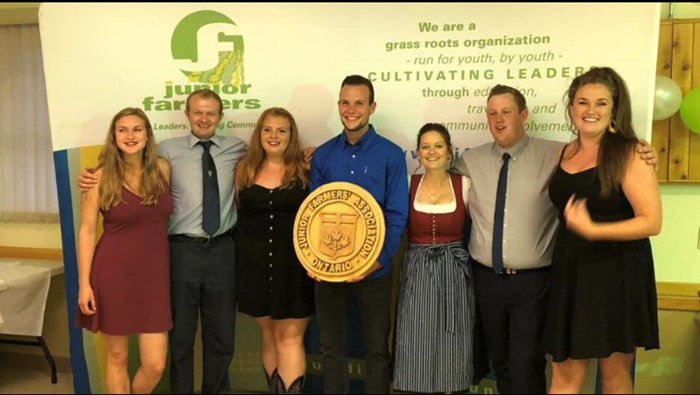 I left Sydney on Friday 25th of May 2018 at 10am and with all the flying and time difference I landed in Toronto at 4pm. At the airport I met Sarah Teefy (Exchange Director), Hazel from Scotland, Julia from Germany and Simone from Austria we then set off to our host Matt Smith in Hamilton (Wentworth Niagara club).  Saturday, we set off for a tour around the town while Matt went and collected Adam from England, Severyn from Switzerland and Laura from Northern Ireland.

With a full on week filled with plenty of farm tours including dairy, beef and pork and the best was seeing Niagara Falls. We did a full adventure pass which was a cable car over whirlpool bay, a river walk alongside the fastest rapids in the world a boat tour on the Maid of the Mist taking us right up to the bottom of the falls and a movie on how the falls was created back in the ice age.

Week 2, I stayed in Waterloo club with Nic Weber, this included a grain factory tour learning about the Mennonites and how they farm, St Jacobs market, a car rally and ice skating I soon learnt that I wasn’t any good at keeping my balance on ice.

Week 3, I stayed at Crystal Blakes in Perth County, was a chilled out week doing a few farm tours, an escape room, spending a lot of time at a cottage on Lake Huron watching the sunset and drinking, a learn to dance night where we had to learn a classic 2 step. I also drove a fair bit this week what a challenge that is trying to stay on the opposite side of the road!!

Week 4, We stayed with Tina Wark in Grey County one of the members have a cottage on a small lake, so we stayed here all week. We adventured a lot this week doing a heap of hiking to see different parts of the Bruce Peninsula, over hanging rocks, massive clear water bays and plenty of small caves that aren’t made for me to be climbing through!

We headed off to Middlesex County for the week getting to see plenty of amazing sites including an old castle from when London Canada was formed. It was originally an old court house with secret passages from the judges room so they didn’t have to walk out through the crowd. The prison was down stairs with part of it still being there so you could see how small it was and you could see the wear in the concrete from where the ball and chains dragged from the prisoners legs. It is now just the council chambers for the city of London.

We also got to see a curling stone factory,  1 of only 2 in the world with the other one being located in Scotland. We got to see how they machine the rock down to make the perfect size and weight stone, how they glue the handles and what makes the stones a different colour. After this we headed off to see an aircraft museum which had WW2 aircrafts that were still able to fly.  Through the week we also got to see different farming operations and helped out hay carting on one of the evenings.

The next week we headed down to Essex Kent  where we got to see Canada’s lowest point.  Point Pelee on this day was the hottest getting to 45 degrees, needless to say we spent a lot of this week by the pool  and getting to see prides corn seeds, carrot factory operations, sweet potato farm and the best part was getting to go to a range and have a play with guns that are illegal in Australia.  We ended the week with a party at our hosts place then the following day we started our break week where I headed back up to Nic Weber’s. (Tas Exchange 2017)  before heading out to Calgary on Thursday to meet up with the rest of the delegates!

Once I arrived in Calgary we all caught up at the hotel and planned what we were going to do for the following 2 days at the stampede. We set off early Friday and joined the massive line of people, we started off seeing a dog show, doing obstacles and courses, frisbee catching and dog long jump!  We toured a lot of local agricultural stands and also getting let into the International Agricultural Bar. Here we got to talk with like minded people from all around the world, the first people I bumped into were Aussie’s from south Australia.  That afternoon we had booked tickets to see the rodeo with all the normal events with professional bull riders and local riders.

Saturday saw us have a well deserved sleep in, we had booked to see the grandstand show which had chuck wagon racing 9 heats in total, then an organisation called Young Canadians do a few performances along with comedians, singers, a magician and plenty of fire works. For the last few hours we ventured into a bar called Cowboys which would have had at least 2000 people jammed into one marque.

Sunday morning was a pretty slow day for motivation with us only seeing the Calgary Tower then jumping on the plane to restart our exchange in Renfrew County.

2 weeks in Renfrew county saw us take part in plenty of activities and farm tours including dairy farms, bees, blueberries, hemp and beef cattle as well as hiking to High Falls, cow patty golf, also a day trip to Ottawa to tour Parliament House and the Canadian Mint.

The next week saw us head down to Peterborough county staying with Chris McFarlane. Here we got to see the lift locks, we even canoed over the locks and had a behind-the-scenes tour of how they worked.  We also got to see some sheep farms, hunting and fishing conservatory, caves, a local hockey game, a prelim final lacrosse game and also tried a hand at axe throwing!

Duram West was my next county to go visit, staying with Brian Wetheral and his family.  Here we saw a duck farm, mushroom farm and more dairy, beef and cash crop farms. We also had a challenge this week to cook something from our own country for an international pot luck dinner! Being the master chef that I am, I managed to make lamingtons and  chocolate ripple cake!  On the Saturday we headed back up to Renfrew county for the banquet which is a dinner to celebrate our trip and past members that had been on exchange. What a great night catching up with a lot of people we had met along the trip!

Sunday saw us have a 6 hour drive down to Wellington county. Here we got to see a sheep dairy, the University of Guelph dairy research barn (25 million set up) a compost business and also a rainbow trout farm.

Finally our final week on exchange and we started it off at a donkey farm, then laser tag, fish farm, plus a horse riding tour of the University of Guelph.  Toronto site seeing included the CN Tower and a river cruise along the harbour front seeing the city from the lake.  Now with only a few days left of my exchange we had a few tours left plus a spit roast planned for our going away party on Saturday.

The final last few days of my exchange was amazing and hard to process as we knew we would be saying goodbye very soon to each other. Saturday afternoon we said our goodbyes to Severin from Switzerland who was off starting a 12 month adventure, it certainly wasn’t the same feeling when 7 became 6.

I began to say a lot of final goodbyess before heading back up to Renfrew county for the 3 weeks.

Here I stayed with Steve and Nancy Shultz. Their 2 boys are heavily part of Junior Farmers and they had hosted Sev and Adam when we was in Renfrew county earlier. I was also lucky enough to be able to help out on another members farm where they have 1200 acres of cropping and a hay business. They kept me busy doing hay, cultivating, discing, stone picking, and also some maintenance on one of their properties.

In the last week I got to help the club out at the local ploughing match on the gate and also promoting Junior Farmers in their tent and talking about my experience!  This pretty much brought my trip to an end.

My trip  would never have been possible with out my sponsor Kennedy’s Welding - I can’t thank them enough.  Thank you to the Junior Farmers of Ontario for hosting and touring me around for 3 months  and most of all Rural Youth Tasmania. It was an amazing opportunity and I will be forever grateful!   I encourage everyone to have a go and put in to go on exchange. I was always scared to have a go but now I wouldn’t think twice about going again!