Well, where do I start? My Young Endeavour experience has been one of the most remarkable things I have ever done in my life (so far). No words can describe this experience. I would highly recommend it to anyone!!

I was sent a backpack, which was not very large at all, for me to pack TWELVE days worth of clothes, toiletries, towels, shoes, sleeping bag etc; in to... well that job took about a day to complete. Finally, my backpack was full to the brim! Ready for the 3 and a half hour trek to Hobart from Stowport. Staying the night before my voyage in Hobart with family, I hardly slept a wink; whether it was exhilaration or nervousness, or the thought of meeting a whole new bundle of friends! Eventually getting up at 6am to get ready and head in to the Hobart wharf to meet the good ship "STS Young Endeavour" at 1500 hours and the youth crew that I will be spending the next 12 days sailing with.

We were welcomed on board with big hugs and plenty of smiles. Bags popped on to our (very small) bunks (12 girls in the "bow" cabin – bow meaning the front of the ship – this was going to be interesting!) Then put in to 3 "watches" (which I will explain later) these were Blue, Red and White! I was in Blue Watch or as it later became known: "Blue Twatch" haha cheers to Chappy!! 7 other youth crew in my watch, with Adrian being our watch leader – fantastic laid back watch leader!

We were then reading to set sail! The joy of feeling the ship move away from the pier is almost beyond words and before long she began to sway with the long, easy swells flowing beneath her as we headed out into the Derwent River. We anchored in Sandy Bay for the evening where we all had a chance to climb aloft; yes this meant climbing to the top of the mainmast which is 32 metres tall!!! It was great fun, not frightening at all... honest... getting to watch the sunset over Mount Wellington was quite spectacular!
We then settled in for our final decent sleep in calm waters, ready for some long days ahead. Waking up at 6am we prepared to participate in an event to mark the 100th anniversary of Mawson's Australasian Antarctic Expedition, which departed Hobart on 02 December 1911, joining a flotilla of historic and replica vessels circa early 1900 sailing along the Derwent River. I stood on the Bow Sprit at the front of the boat with my harness on in a good old "Titanic" stance! This was a great historic event to be a part of and will certainly be a story for the grandchildren!

Then we were off, headed for the unknown, (or Storm Bay, then the Southern Ocean, then around the Tasman Peninsula – where I first began feeling a little bit queezy for a couple of days – then heading up the coast through the Tasman Sea.) Each day the youth crew were put to work setting and furling sails (sometimes at 0200 hours!!), cleaning the ship of a morning, working in the galley and keeping watch. A watch was a four hour period of time where the watch group on duty would steer the ship, work the sails, check climate data, engines and bilges as well as keep a lookout for vessels and anything else of interest in the surrounding ocean, including seals along the East Coast of Tasmania and many a dolphin up the East Coast of Australia!! Blue Watch had a good reputation of some "everyday I'm shufflin" between 0400 and 0600 hours, we loved dancing until the sun rises – and we certainly witnessed some striking sunrises! I really enjoyed being at the helm of the ship, surfing the 4 metre waves across Bass Straight! We managed to sail across the entire Bass Straight, not many youth crews have been able to (having to get the engines running due to wind and swell direction) The whole V21/11 Youth Crew were delighted by this!

We stopped off at a few stunning spots along the way, including Wine Glass Bay, East Coast of Tasmania and Eden on the South-East of NSW. Learning a lot of Australian History and witnessing some amazing sights!

One of the highlights of the trip would have to be Command Day. This is where the staff crew hand over the reigns to the youth crew for a whole of 24 hours from 1300 hours until 1300 hours the following day! We had to choose our own crew, replacing the staff, and also had a big list of objectives to be done within the 24 hours for us to pass our "Sail Training"! I became Head Chef for the 24 hours and what a great experience it was, working in such a small galley with two young men and having to cook up 105 meals within the 24 hours was definitely an indescribable experience! Cooking an Aussie Pub Meal the Friday night, Big Brekkie for Saturday morning then a huge Christmas Feast for Saturday lunch! We managed to JUST sneak in the last of the objectives at 1250 hours and were very happy to hand the ship back over to the staff!

We then spent the rest of the afternoon swimming in Port Jackson, later finding out that there were sharks swimming underneath us the whole time!!! That evening we had a special night relaxing and some secrets that can only be found out when sailing the Young Endeavour were discussed!

The feeling of sailing in to Sydney Harbour is just magnificent... striking scenery that just takes your breath away. I made three lifelong friends on the trip, Mitchell in Victoria, Maitlyn in Western Australia and Aaron in Queensland. We all still keep in touch and are eager for future adventures when we catch up!

I would not have had this opportunity if it weren't for the Rural Youth Organisation of Tasmania and anyone who is offered a chance to experience the thrills of the Young Endeavour then grab it with both hands and take a chance! 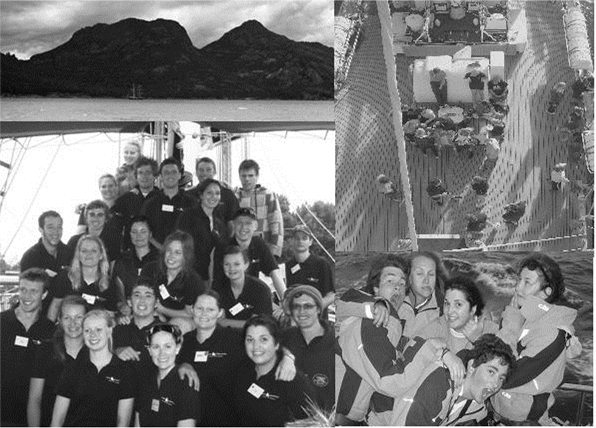