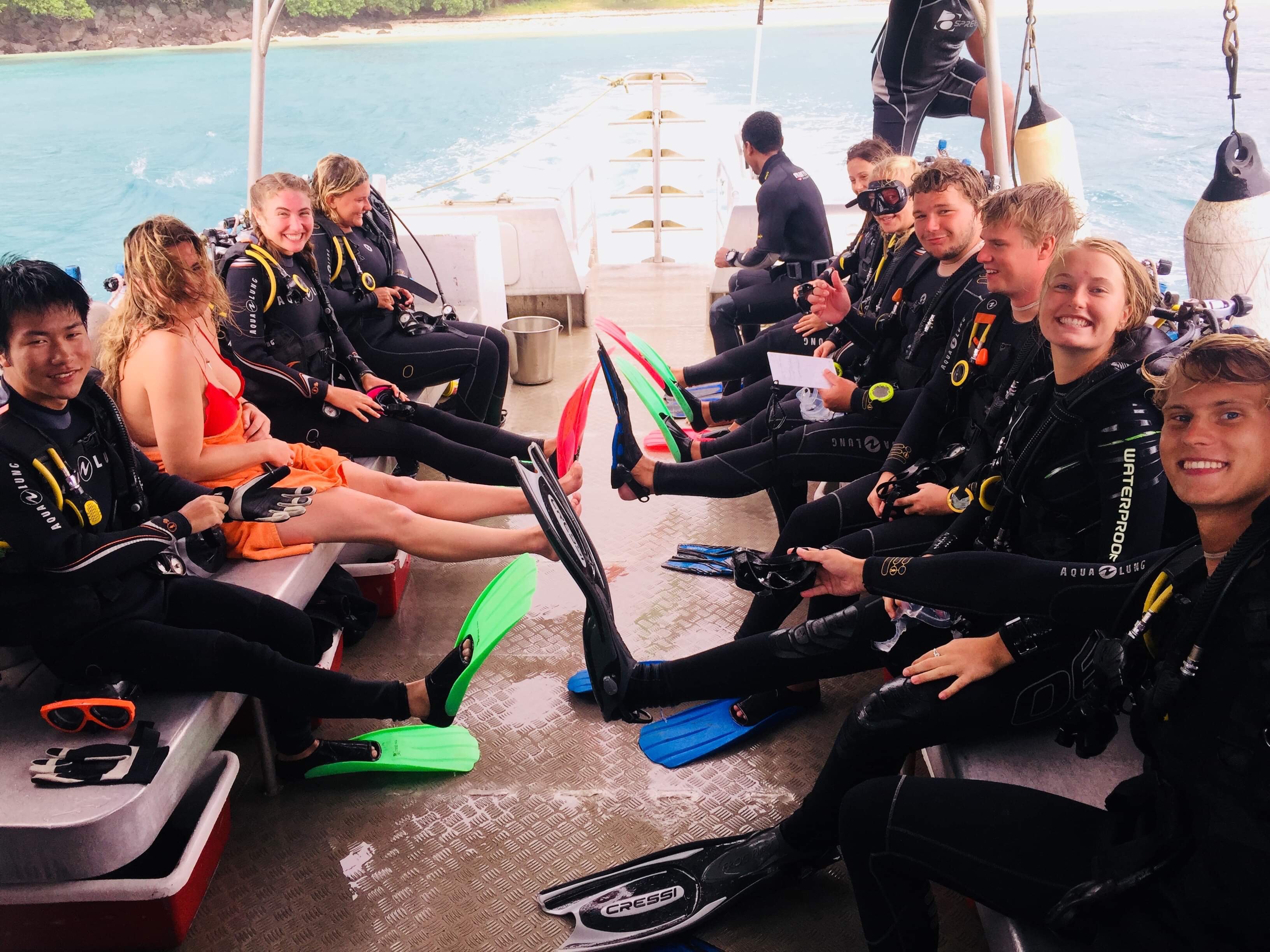 "3 months diving, volunteering and making friends with sharks in the middle of the Pacific Ocean"

On arriving in Nadi airport I was taken to a host family for the night where I was made to feel incredibly welcome and after a delicious Indian/Fijian dinner I helped the kids with their English and Maths homework, and they helped me learn a few Fijian words and phrases.

The next morning, I was picked up by a Projects Abroad staff member and taken to the bus station where I jumped on the bus to Pacific Harbour on the ‘Coral Coast’. I spent the three-hour trip converting nerves into excitement as the road wound along the coast treating me with glimpses of aqua blue water through the palm trees. Arriving in Pacific Harbour I made my way to Ventura Apartment- my home for the next three months! I was greeted by a ‘Bula’ in more accents than I could get my head around as I met all of the other volunteers and staff members. Ventura is where we lived but also where the classroom, pool, mangrove nursery, data room and recreational area was.

Through Projects Abroad I took part in the Shark conservation program as well as the training and assessment for my PADI Dive Master certification. Our weeks ran Sunday through to Thursday starting with two survey dives and; weather permitting, BRUV drops on Sunday morning. During survey dives we collected data on both indicator fish and shark species using an underwater slate. Indicator fish are species that have identified under the projects conservation goal that are both part of the shark species diet and are fished by the locals.

One of the main conservation goals was to determine whether or not the MPA’s (Marine Protected Areas) were more abundant and to ultimately increase the size of the MPA’s in the Beqa Lagoon and surrounding areas where we were working. A BRUV (baited remote underwater video) allows an alternate way to collect data by collecting video footage without human presence/disruption.

The Beqa (Benga) Lagoon offered both bright turquoise, glassy, post card days along with washing machine, ‘hope you didn’t eat lunch’ dive days. Despite the conditions, without fail, the plankton rich waters support a huge diversity of marine meaning every dive was as good as the next.

Everyone looked forward to our underwater time during survey dives, but our weeks were filled with shark tagging, working in the mangrove nursery, community education, data analysis, dive theory, culture, volunteering and teaching in villages, beach cleans, the list goes on…

I enjoyed the entire time I was volunteering with Projects Abroad and all of the different activities not only kept the week interesting but allowed the project to have a real and holistic impact.

The staff and other volunteers at Projects Abroad quickly became family. Oni the amazing cook assuming the role as our Fijian Mum. Fijian culture has a large Indian influence with an approximate Indo-Fijian population of 300,000 in the country of Fiji, so our meals ranged from amazing curries to coconut fish dishes and the traditional underground oven ‘lovo’ meals.

Other than sugar export the largest industry in Fiji is tourism and although with tourism comes money, it presents other problems. The leading cause of mangrove forest deforestation in the islands is clearing for resorts and as mangroves are the nursery grounds for juvenile fish, sharks and other tropical species, protect the land from storm damage and the reefs by acting as a filtration system (among many other things) this clearing can have and does have huge ecological impacts. As such a big focus of ours was mangrove reforestation which involved collecting mangrove propagules, planting them in our nursery, nursery maintenance and then replanting the mangroves once they were established.

Shark dives… 50+ bull sharks, no cages dancing in front of divers 30m under the Pacific Ocean. These shark dives run by Beqa Adventure Divers were definitely the highlight of each month and gave a perspective to the shark conservation work we were doing. Sitting on the boat before my first shark dive was probably the most adrenaline-charged excitement I had ever felt and yet once I was in the water it was an incredibly serene experience. These animals that are demonised through media; although to be respected as apex predators, are graceful and peaceful animals evolved to a streamlined perfection. I had dived with sharks before, but nothing compared to this and I resurfaced 40 minutes later in awe and more passionate than I was before. Nothing can describe this experience and photos don’t go half way to doing it justice. Through doing these dives regularly I learned a great deal about shark behaviour and biology and started noticing small details and behavioural consistencies as well as getting to recognise individual sharks. Shark identifications allows to collect a database of shark populations etc.

Fiji is amazingly beautiful and, in many places, fairly untouched. However, it is unfortunate that even in this mostly pristine environment, pollution is still a major issue. With the other volunteers I did several beach cleans and we were continually disappointed and shocked at extreme impact of our wasteful society even in the most remote of mangrove forests etc. As much as we can enjoy the beauty of these destinations this was a sobering reality of the reach and impact of our actions and choices.

On weekends we were able to do anything and although I spent some weekends studying for my dive master exams I got the opportunity for lots of adventures around the Fijian Islands. I visited waterfalls and tubed down the Navua River, went to the Island where Castaway was filmed, camped out on remote beaches, stayed in a village with friends we had made on Beqa Island, snorkelled, watched sunsets, dived and hiked.

On my last weekend in Fiji after I had been signed off on my Dive Master qualification I had one last dive at a dive site renowned for Tiger Sharks and I was extremely lucky and saw two 3m + Tigers as well Lemon, Tawny Nurse and Bull Sharks. This was the best dive I had in Fiji and the diversity and number of fish (it was like soup!) is a clear representation of the health of the waters. The Tiger Sharks had a presence I had not noticed with other sharks and was clearly at the top of the pecking order- truly the king of the ocean. Again, like the bull shark dives we were not in cages and were sitting on the bottom at approximately 30 m. The non-aggressive confidence and proximity of these sharks can only be described with a series of photos…

I had the most amazing time in Fiji and am so lucky to have come away with new knowledge, a fuelled passion for marine biology, my Dive Master qualification, amazing memories and lifelong friends from all around the world.